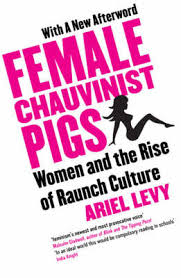 In 2005, Ariel Levy came out with Female Chauvinist Pigs: Women and the Rise of Raunch Culture (Free Press, 2005), which examined the role that women played in their own overt sexual liberation. She defines Female Chauvinist Pigs as “women who make sex objects of other women and of ourselves” (pg 4). Women like Mia Leist, who works for Girls Gone Wild and incites young girls to flash their breasts and vagina for a GGW hat or the vociferous approval of young men watching as it is being filmed; women like Christie Hefner, Hugh Hefner’s daughter, who is actually the CEO of Playboy—along with all the other female CFO’s that work there—a mother, a Human Rights and ERA activist, and photographer. They are all women—and they keep alive Hugh Hefner’s wet dream—a hot bed of young bunnies willing to do anything for money and fame.

How did this happen? How did we go from Betty Friedan and Susan Brownmiller—two revolutionary mavericks and feminists who fought to liberate us from patriarchal norms that confined us to the kitchen, the home, and silence—to the kind of liberation that keeps us in the bedroom, all sultry-eyed and complaisant, of our own volition?

In her book, Levy draws on all these examples of women contributing to the kind of shackles we were trying to free ourselves from—shackles that defined us based on men’s needs, wants, desires—male-dominated fantasies of female flesh and potential, or lack thereof. Having interviewed drunken girls flashing their lithe bodies for approval, to Christie Hefner, to female publishers who give book deals to sex-goddesses simply for appealing to the male masses, their responses are the same: this is the new liberation for women; they can be “just like men” and have the freedom that men do. Women no longer need to be embarrassed about their sexuality or confine it to private chambers. But as Levy points out—men don’t parade around in their underwear, they don’t get implants, they don’t use their sexuality to attain power, and none of the athletes expose their penis in magazines. Therefore, we are not acting just like the men—we are only acting how some men would like for us to act.

According to Levy, “‘Raunchy’ and ‘liberated’ are not synonyms. It is worth asking ourselves if this bawdy world of boobs and gams we have resurrected reflects how far we’ve come, or how far we have left to go” (pg. 5). On this note, we have a long way to go; as a matter of fact, it would appear that we are backtracking, sliding downhill with great abandon. We have gone from attempting to prove ourselves worthy in the boardroom, as professional women, to scantily clad Hefner bunnies only fit for the bedroom with a camera taping our poses. Young girls define themselves according to their sexuality and they have television shows like Pretty Little Liars and The Secret Life of an American Teenager to thank. They “sext” their sexual power to boys via their cell phones, and they dress like women in their twenties when they’re only twelve.

Adult women feel better about themselves when they have fat sucked out of their bodies and augment their breasts a few sizes larger—an industry whose clientele increased more than 700 percent between 1992 and 2004—and mothers are giving breast gifts to their daughters for their 16th birthdays. They indulge in shows like Mob Wives and Desperate Housewives of Atlanta and New York and every city imaginable—depicting vapid women who have small waistlines, large, fake breasts, botoxed faces, and raunchy tongues—all rich because they’re married to men with money. We are enthralled by these real life divas—we are not them or anything like them—but we keep them on the air because they are caricatures of femininity.

When Levy states that “It no longer makes sense to blame men,” she is correct (pg. 35). Women, young and old alike, are contributing to the demise of female power by subjugating themselves and one another to a system of sexual behavior that reduces women to sexual objects—commodities. Everyone is making money off the sexual raunch of female flesh, from Hugh Hefner and the women on his board who run his business to publishers, newspapers, television networks, advertisers, businesses, the music industry, and so on. And yes, the women whose sexuality is being sold are making money as well, but for a hefty price—one that doesn’t come with dollar signs. And if you don’t know what this means, then drive around the block a few times and look at the girls as young as eight and eleven—look at how they dress and strut their stuff, how they think about their futures not as scientists and mathematicians and athletes, but as models, and movie stars, and singers, and bunnies. The feminist movement freed women from a docile existence subservient to men and this raunch liberation has put them on the path to existing as the real life caricatures of male fantasies—barbie-like embodiments of male pleasure.

This is not the answer to our freedom—in this way, we continue to exist as the second sex—we still function to serve the needs of men, appeal to their desires and adhere to their perceived “laws” of our nature. Levy asks, “Why can’t we be sexy and frisky and in control without being commodified? (pg. 43). We can be as sexy as men are without purchasing bigger breasts, stapling in our cheeks and foreheads, dressing like vamps, or exposing our cleavage. We can have the kind of power that makes them men—their confidence—which stems not from their biceps and flat abs and penis size, but from their ambitions, education, careers, and the way they hold themselves upright because of these achievements—out of self-pride and self-ownership.

Until we see ourselves differently, no one else will.