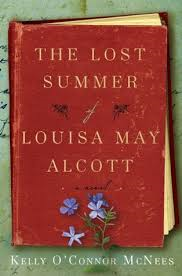 Kelly O’Connor McNees’ The Lost Summer of Louisa May Alcott (2010) is a beautiful find and a revolutionary novel that chronicles one summer during the youth of the writer who gave us Little Women. In this novel, McNees captures the fiery and independent spirit of Louisa May Alcott who refuses to play by the rules imposed on young women during the Victorian era in which she lived and wrote. Although this is a novel, McNees takes care to stay true to the nature of the Alcotts and the events depicted in the biographies and books written about them. However, there is one summer in 1851, during which not much was written about the family or Louisa, and this is where McNees takes some liberties and fills in the blanks.

From the beginning, Louisa May Alcott is portrayed as an independent young woman with literary aspirations. Her main goal during this summer is to help her family settle into their new summer home in Walpole, New Hampshire — a loan from charitable friends –and then take the money she has saved from publishing her writing to move to Boston, rent an apartment, and pursue the life of a real writer. However, like most young women during this time, there are quite a few barriers placed in her path that keep her immobile.

The main barrier is her father, Bronson, a transcendental philosopher who doesn’t  believe in working. Louisa shows a great deal of resentment towards her father, for they live in poverty and always at the mercy of charitable family and friends as a result of his “grand ideas and little common sense” (26). These grand ideas include investing other people’s money in schools, but his transcendental teachings offend his investors, who eventually pull out. Even when he considers giving public speeches on philosophers, he refuses to charge money because “he was morally opposed to all acts of commerce…His philosophies were concerned with ideals and symbols but rarely realities” (15-16). Because of his unwillingness to work in order to support his wife and daughters, it is they who do all the work to support him: they bake and clean and embroider; they make whatever they need, like candles and curtains; and it is by publishing her stories that Louisa is able to contribute to the family’s financial needs.

And it is because of her father that Louisa May Alcott swears never to marry. Even her own mother, Abba, refers to marriage as a prison for women: “Wherever I turn, I see that women are like beasts of burden, under the yoke, dragging their lengthening chain” (30). For Louisa, marriage is an institution that will inhibit her and stand in the way of her future as a writer. Marriage and writing, at least for women, cannot go together:

<blockquote>I want <em>to work</em>. And besides, when, amongst all the birthing and bathing and china washing and rug sweeping and fire stoking do you think I’d have time to write? Or should I let my family go hungry and languish in frayed clothes while I place my work above their needs, as Father has done to us? (30)</blockquote>

Louisa, against her will, falls in love with Joseph, and he has no problems falling for her. There is a lot of tug and pull between them, but when he shows her that he respects her independence and would not interfere with her dreams of writing, she gives in to his affections. In a very sudden and unexpected scene, they make love, out on the fields, at night, without a protest. This is anachronistic, especially as you consider the time period and the pressures young girls like Louisa May Alcott suffered when it came to sex. First of all, middle class proper girls were not talked to about sex. It was not a conversation one had with them; it wasn’t appropriate, and girls were mainly afraid of the idea of sex until their wedding night, when their new husbands climbed on top of them and showed them what they didn’t know. However their husband treated them that first night was their first experience, and whether it was violent or gentle, mechanical or passionate, that’s what came to be understood for them as normal.

When McNees has them make love on the grass against the backdrop of the moon, it is very romantic, but she takes advantage of the fact that Alcott was an independent and unique young woman for her time – that still does not ring true to our understanding of women in the 1800s, especially in terms of they pressure they endured to comply with the cult of true womanhood. A respectable girl, especially one with a philosopher for a father with friendly connections to Emerson and Thoreau – an educated and enlightened lot, would not have taken her clothes off and undressed the man she loved, lying beneath him for a one night stand, or otherwise.

If there had been an internal conflict in Alcott’s narrative, showing that this was not a normal thing for her or for girls in her station, then perhaps it would have made more sense, but there was no warning at all. No thought. No consideration. No fear of what her first time would be like or that she may get pregnant, which would ruin her, her family, and her aspirations for living an independent life as a writer. No reluctance at all. Having sex outside of marriage was scandalous enough, but to have Alcott initiate her first sexual experience with such blind ardor doesn’t bode well in this situation.

It becomes more incredulous when, after the love-making scene, Alcott turns to Joseph and tells him to marry Nora, a rich girl his father had chosen for him as a wife in order to save their family business: “I can make five dollars a story in Boston, and I intend to go as soon as I can…And I intend to go alone…I don’t think I could be married, not to anyone.” This is not something an innocent girl in her time period could do, let alone envision for herself, especially after her first sexual encounter. Had not the sex scene taken place, this sacrifice of love and marriage would have been more readily tolerable and championed. But the sexual encounter between Joseph and Alcott soured this twist by making it unrealistic and quite unbelievable.

In spite of this jarring hiccup, the rest of the novel ran along a more realistic feminist thread of Alcott’s decisions for independence. She leaves her family, travels to Boston, experiences hardship and rejection as a writer, and in the end, her will is once again tested, forcing her to choose between love and writing. Having taken a part-time job as a seamstress that would help her pay her way through writing and living in Boston, Joseph arrives and proposes to her. Having nothing else – no one interested in her work and contemplating becoming a teacher full-time, Joseph’s arrival is timely; he is a knight in shining armor about to help the damsel in distress. She chooses Joseph and marriage, but upon arrival at her apartment to pack, she also receives an acceptance for her work from a publisher. And this time, she chooses the publisher, the writing, the struggle that comes with living independently, not because she loves Joseph less, but because marrying Joseph would place her in the same lot she had abandoned when she left her father.

Married to Joseph, Louisa knew “she would shoulder the debts of two fathers – one dead [Joseph’s late father], with creditors lurking around his grave, the other convinced that work would sully his philosopher’s soul. The burden of it, the endless grubbing for just enough money to get by, filled her with weariness.”

In addition to these debts, she would also have to care for Joseph’s younger and spoiled sister, Catherine, who was used to extravagant parties and clothing even though her father and brother could not afford it. Joseph’s responsibility for her would become Alcott’s: Catherine didn’t like to read and could hardly cook or sew. It was no use counting on her help – she would have two to care for. A dull headache began radiating along Louisa’s hairline.”

In choosing publication and writing over Joseph, Alcott chose herself, and this is a feminist and pioneering act on behalf of Alcott; a woman’s duty in those days was to care for others, her family, and think of herself last. Anything else was considered “unnatural” in a woman. Then unnatural, Louisa May Alcott was, for she never married, and because of her unnatural and unfeminine choices, she wrote one of the best books ever written for girls and about girls: Little Women. This book became an overnight success, making her a wealthy woman who no longer needed to fear poverty or making choices that went against her nature.

Overall, as fiction is concerned, this is a lovely book that shows us the audacious nature of one of our beloved writers, and even though it is fictional, there is a lot of Louisa May Alcott in this book. We hear her voice and experience her struggles in choosing self over duty to others, which few women circa the Victorian Era dared to envision let alone pursue. And in this, Kelly O’Connor McNees got it right.