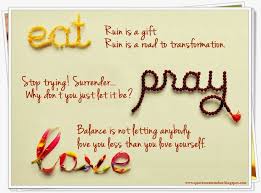 Eat, Pray, Love’s (Viking Adult, 2006 ) Elizabeth Gilbert had me within the first few pages of her memoir when she fell to the cool floor in her bathroom and admitted to herself that she no longer wanted to be married and that she had no desire to be a mother. Living in a society that inscribes upon us the desire to marry and mother—as if our lives cannot be full or functioning without achieving both—it is refreshing to encounter a woman who makes this claim, not with shame and guilt, but with candor and courage. Because of this, Eat, Pray, Love has the makings of a modern feminist text, and Gilbert represents a woman who places herself on a journey towards self-identity and empowerment.

At the age of thirty, Elizabeth Gilbert, a professional and successful writer, finds herself stifled and imprisoned in a life that she admits she had “actively participated in [creating].” According to a decision she and her husband of six years had determined, it was at the age of thirty that Gilbert would get serious about life and have a baby. Each time they attempted to get pregnant and she found that it hadn’t worked, she sighed with relief: “I would find myself whispering furtively in the bathroom: Thank you, thank you, thank you, thank you for giving me one more month to live.” Becoming a mother was a death sentence to her. She was tired of the domestication that motherhood would promise wherein she would get to write “somewhere in her stolen moments.” She was tired of being in a marriage that filled her with an interminable sense of responsibility and duties and sacrifices that she would have to make for her husband and her children.

At the age of thirty-one, she relinquished everything that she owned—her apartment in the city, a house in the suburbs, and her hard-earned money as a writer just to get out of her marriage. And a few years later, she embarked on a one-year journey of self-inquiry that functioned not only to get her away from the familiar scenes of New York, but also to flee “a state of hopeless and life-threatening despair” that choked her with the dissolution of her marriage and an affair with a younger man that followed her divorce. Her journey first takes her to Italy, where she pursues the pleasure of both food and language. After four months, she moved on to her Guru’s Ashram in India, wherein she meditated, committed herself to yoga, and let go of the ghosts of her dead relationships that filled her with guilt and self-reproach.

Her vow of celibacy lasted her all the way to Bali, where she went to find balance, but found love as well. And even though she swears that her older Brazilian lover did not swoop in to save her, in some ways he did, because he presents her with the kind of man that suits her lifestyle and her need for independence and love. For the first time in her life, she has a relationship that does not resemble the one her parents had taught her: the emotionally withdrawn man, and the woman who craved his attention.

A much older man, in his fifties, Felipe is not an American man, which is why this relationship seems to work for her. He’s already had kids, and so he will not pressure her for them. He has his own country, his own obligations, and independence, and he is willing to love her across continents, so they travel to meet with one another when they can. A transcontinental affair, this works when the two people involved only rely on one another for pleasure, for love, and not for marriage, children, and building a home. This is a unique kind of relationship, a courageous one that exists beyond stereotypes and societal duties that we have come to adopt out of pressure and social conditioning.